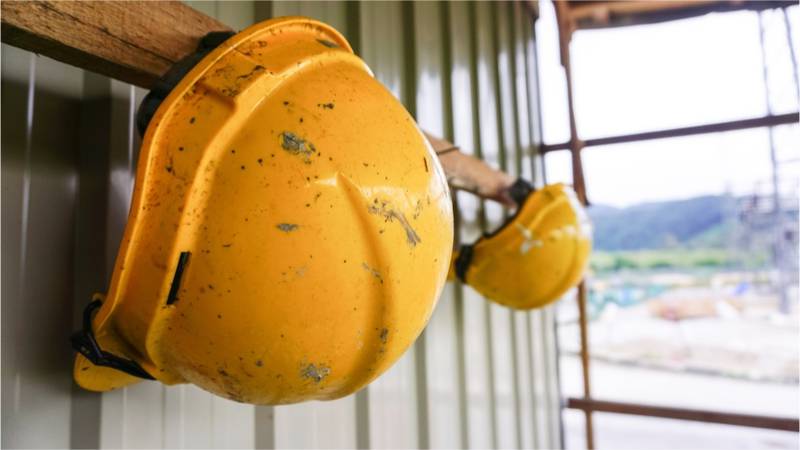 OSHA has determined that there are four main safety hazards, excluding transportation incidents, that account for a majority of all construction worker deaths each year on the jobsite. Dubbed the “Fatal Four” by OSHA, they include falls, electrocutions, being struck by objects, and getting caught in or between hazards. In 2016, 63.7% of all fatalities at construction sites were from one of OSHA’s Fatal Four.

Today we are focusing on struck-by hazards and how to prevent and protect against them. Struck-by injuries occur when a worker comes into forcible contact with a flying, falling, swinging or rolling object. Of the Fatal Four hazards, struck-by hazards are the second highest cause of fatalities among construction workers.

Injuries from flying objects can include being struck by accidental nail gun discharges, thrown tools or debris, or the tip flying off a saw blade. Power tools should be inspected to ensure protective guards are in place and in proper working condition. Workers should always wear safety glasses, goggles or a face shield when using power tools. Hard hats should be worn by all employees on the jobsite at all times.

Nail gun accidents are one of the most common struck-by flying object hazards. Workers should steer clear of the line of sight when a nail gun is being used. This includes workers who might be working on the opposite side of a wall of plywood or sheetrock. Misfires have enough force that they can easily penetrate plywood and gypsum board and strike the worker on the opposite side.

Struck-by falling object injuries can encompass everything from tools and materials being knocked off unprotected edges to a suspended load on a crane coming loose. Workers should avoid areas where work is being performed overhead. These areas should be cordoned off to protect workers from being struck by falling debris or tools. Workers should never position themselves under a suspended load.

Tools and materials should be secured when performing overhead work using toeboards or screens to prevent objects falling or debris nets and catch platforms to deflect falling objects. Workers should never throw or drop any tool or object to avoid causing a struck-by injury.

Injuries caused by rolling objects usually involve a worker being struck by a vehicle or heavy equipment while it’s in motion but also include any object that rolls, moves or slides on the same level as a worker. Workers should steer clear of vehicles and heavy equipment in use.

Awareness of your surroundings and proper use of personal protective equipment (PPE) can go a long way in avoiding injuries at the construction site. It is important for employers to alert all workers of areas where there is greater potential for struck-by accidents to occur and to limit employee access to those areas.

As we mentioned earlier, hard hats need to be worn at all times on the jobsite to protect workers from struck-by hazards. Hard hats should be inspected for cracks, gouges, dents or other damage before each use. Damaged or worn out hard hats should be replaced immediately.

Hard hats should be properly adjusted to sit firmly and securely on the head. There should be enough room between the suspension and shell to absorb the impact if struck by an object.

Prolonged exposure to sunlight, cleaning solvents and paint can all damage or weaken a hard hat. To preserve the integrity of a hard hat they should only be cleaned with mild soap and water and stored out of direct sunlight when not being worn.

OSHA requires that employers provide employees with proper PPE. This varies by the type of work being done and the hazards workers are exposed to but items such as hard hats, safety glasses and face shields should be provided to protect works from struck-by hazards.

All PPE used at the construction site, whether it’s a worker's steel-toed boots or hard hats provided by the employer, should meet American National Standards Institute (ANSI) standards. PPE should be inspected prior to each use to ensure that it’s in proper working condition and free from any defects or damage.