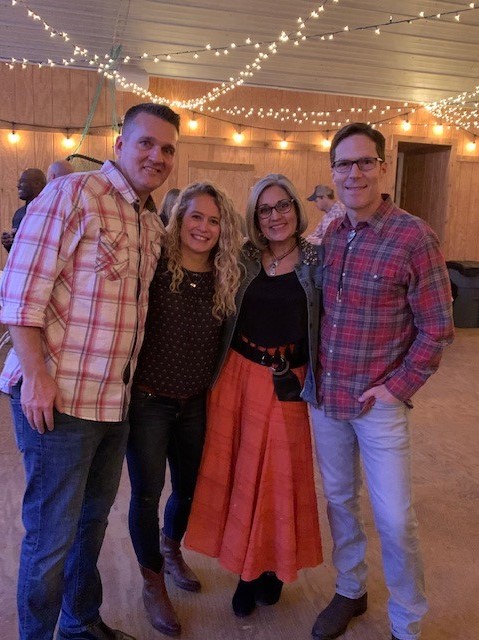 It’s not unusual to find companies that encourage their employees to volunteer in the community. But it’s exciting to work for one that not only talks the talk but helps its team members walk the walk.

At ConstructConnect, you can look no further than Derek Guffey, Vice President Product Management BPM, for a great example of this volunteer spirit. Growing up in Tipton, Indiana, Derek has fond memories of the old-fashioned square dance that his grandfather, Hersh Robinson, would throw every year—a tradition that continued for 25 years and grew to include more than 200 people.

Starting in the mid-1980s, the Robinson Family and Friends Square Dance brought friends and family together each year to celebrate life and love. “Family and friends would get together and square dance with a live band. We tried to keep the tradition going, but it fizzled out after 25 years,” Derek said.

Sharing memories of this special event with his friends and family at their annual “FriendsGiving” celebration in 2018, an idea began to take root to revive the event—but with a bigger purpose in mind.

Wanting to bring back the Hoedown tradition, the group wanted to morph it into something new.  The new goal was to raise funds for local charities or people through the power of friendship. “We wanted to put the power of our friend network in play and just how big of an impact we could make. For our first event, we chose the St. Mary’s Child Center. This was a great cause and it just so happened that two of my closest friends serve on their board,” Derek said.

St. Mary’s Child Center Preschool in Indianapolis provides early childhood experiences designed to ensure success in school and build the foundation for life-long success for their children. The center is designed to help all children and families who walk through their doors with the best educational experience possible.

“It gives kids a head-start on education which serves as a foundation for success adults. In Indiana, one in four children live in poverty. Those children start kindergarten two years behind non-impoverished students. Children who attend St. Mary’s show vast improvements in reading and math, stay in school longer, have higher IQ screens, higher graduation rates, and make higher wages as adults. This school provides a wonderful and safe environment for pre-school kids to get the start they deserve,” explained Derek.

Doing Good While Having Fun

The result: FriendsGiving Hoedown, an evening of live music and dancing, to support St. Mary’s Child Center Preschool, was held January 11, 2020 at the Wild Blackberry Farms, a family-owned farm on 40 rolling acres in Fortville, Indiana. The event featured the Jai Baker Trio and drew a large crowd of more than 100 people.

A rousing success, the event raised nearly $30,000 for the early child development center. With an annual cost of $10,000 per child, the event will help to sponsor three students for one year at the preschool. St. Mary’s called the event their “little miracle” and the response has been very heart-warming for all involved.

“We attempted some square dancing,” said Derek with a laugh. “I was overwhelmed with the amount of generosity. Our goal was $15,000 so to exceed it was emotional and rewarding. Knowing we were able to achieve our goal through the love and generosity of our friends was amazing.”

With plans to make the Hoedown an annual event, Derek said they will continue to build on this year’s event. He credits much of this success to the committee of about 12 people who used social media to spread the word. “We want to continue to go where there is need,” he added

Knowing he can blend his professional life with his charitable efforts, Derek appreciates how ConstructConnect provides Community Outreach Volunteer hours as part of its Paid Time Off (PTO) plan. Each team member gets two hours per month to spend volunteering either with their favorite charities or through the company’s Outreach Program.

Derek is also involved in another major charitable effort with ConstructConnect. AEC Cares is an annual event that brings together AEC professionals for a shared purpose in cities that host the annual AIA conference. The one-day event brings together generous sponsors, donors, volunteers, and designers to make as big of an impact as possible in a single day. In 2019, AEC Cares upgraded the chapel and gym at the Las Vegas Rescue Mission.

Derek said it’s inspiring to see people giving their time and money for a one-day event. “I don’t think I would work for a company that didn’t support stuff of this capacity,” he said.

With several of his colleagues donating to the Hoedown, Derek said it was exciting to have President and CEO Dave Conway do more than write a check and attend the event. “Dave is a very charitable person. He expects that of himself and his company. It’s a very cool thing.”

Working for a construction technology company often means work blends into family life and vice versa. However, the win-win for Derek and other ConstructConnect team members is that they can combine their passions with their place of employment.

“This has been a unique instance where you can align both to do something good. This event provided me with the assurance that I’ve chosen the right employer to work with. ConstructConnect is a great place that allows you to influence society,” Derek said.

Women’s History Month: Their Impact and Our Support Read this Blog Post