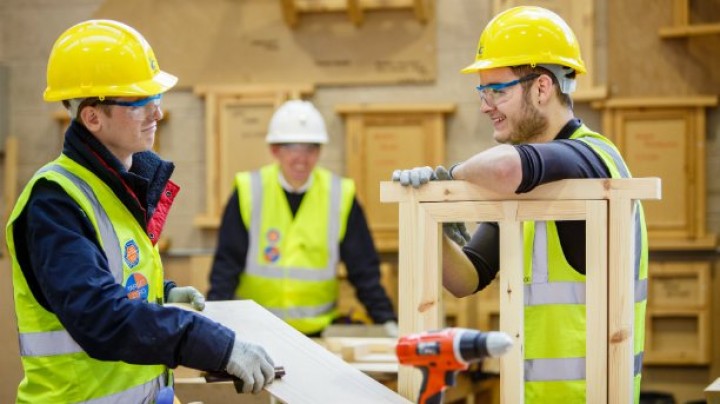 As this next generation of children begins to reach adulthood, the push to get a four year college degree is seen as the only solution to achieve career success. Any other direction is frowned upon by parents and society. Unfortunately, this leaves a huge void in the labor market and ignoring a promising opportunity for today's youth.

College isn't for everyone and there is another choice. Careers in construction are in heavy demand and can provide a lucrative alternative to college.

Over the last 30 years, blue collar careers have not been encouraged at the middle and high school levels. Districts around the country are putting more emphasis on four year college degrees while moving away from a viable option for everyone else.

Beginning in the 80s, vocational classes began to disappear to focus more on emerging STEM courses. It was always thought that shop classes were for remedial students and only lead to low-paying jobs.

Because of this negative perception, there is now a huge shortage of labor in the construction industry. Not only are young students not getting into the trades, the older generation of skilled workers are retiring or dying.

This trend will get worse unless there is a shift toward more vocational training.

The talent pool for skilled laborers is rapidly shrinking.  According to the U.S. Bureau of Labor Statistics, there are about 600,000 vacancies in the construction industry in 2019. By 2026, It's expected to grow to 747,000 unfilled positions.

Although the demand for skilled labor in the U.S. has never been higher, employers are struggling to fill openings. In construction, 78% of firms plan to expand their workforce in 2019. Of that number, 70% admit they will have a difficult time finding qualified workers.

The effects of labor shortage has forced companies to raise salaries and give bonuses. This could be a great opportunity for young adults to make a great living, but again, schools are steering students a different direction.

The unfortunate stereotype of a blue collar worker is an overweight, beer drinking guy. As parents, we feel disappointed in our children when they show any interest in skilled labor.

“Pop culture has glorified the corner office job while unintentionally belittling the jobs that helped build the corner office. As a result, our society has devalued any other path to success and happiness. Community colleges, trade schools, and apprenticeship programs are labeled as alternative.”

Yet, when asked, 72% of next generation workers do not want to work at a desk. That’s a contradiction  in attitude. So why not allow our youth the opportunity to pursue whatever makes them happy?

You would think getting away from a desk job and earn higher wages would appeal more to millennials. Today’s youth is all about technology and construction has become more technology-based than ever before. Trade jobs don’t always involve backbreaking labor. Workers are now using computers, tablets, drones, and robots in everyday operations.

Or better yet, a lack of guidance. Counselors and teachers need to realize this change of direction in the labor force. Not everyone needs or should go to college. Each child is different and should be pointed in a direction that stimulates learning.

Shop programs have become largely irrelevant. The shop classrooms sit empty and have turned into glorified storage rooms. The school’s priorities were firmly focused on college readiness and success at standardized tests. Vocational programs had taken a backseat.

The problem lies in funding. Many schools receive money based on test scores, not how well you can run a TIG welder. Therefore, more math and science teachers get hired. The shop teachers, who are qualified, but usually not accredited, are shown the door.

The irony is, these shop teachers actually have worked in the real world and know how to train a kid to get a quality job. These types of educators were teaching practical skills such as welding, woodworking and auto repair. Not World Geography.

Government programs such as No Child Left Behind had good intentions. It was designed to improve education standards and hold U.S. schools accountability for student achievement. Since funding was based on test scores, schools re-designed their curriculum to focus on narrow academic standards.

This, of course took away resources from trade classes. Which, ironically, ended up leaving children behind.

This unfortunate attitude has created the labor dilemma we currently face. The need for real world training in schools has never been more important. Why not focus on cabinet making instead of English literature? The typical student will never remember what the war of 1812 was all about when they are trying to balance last month’s P&L.

Again, college is not for everyone. We have failed our high school graduates that have no desire to attend university. There is an alternative, but our education system is not encouraging it.

And What About the Girls?

Nationwide, only 2% of auto mechanics, 3% of construction workers and 4.5% of welders are women, according to the Bureau of Labor Statistics.

When I was in school in the 80s, boys took wood and metal shop, girls took home ec. Girls were allowed to take shop classes, but attendance was extremely low.

Nowadays, there is a progressive girl power movement. Many girls would love to get into vocational training, but may be discouraged by stereotypes.

A great example of this change is in Myers Park High School in Charlotte, North Carolina. This school does offer auto shop classes for both genders. However, this coed version was dominated by the boys and only one or twp girls signed up. Then the school got smart and created a girls only class. Called “Intro to Auto,” it filled immediately up to 16 girls.

Given the right opportunity, young girls and women could help fill these work labor holes.

I have 3 kids. My first two enjoyed school, got good grades and decided to go to college while they were still in high school. But that third kid, he hated school. It wasn’t so much that he hated it, he was just bored in his general education classes and his grades suffered.

“Why do I need to learn how a plant cell works?” he asks me. Great question, only I couldn’t answer it because I have no recollection from my high school days.

His junior year, he discovered metal shop. Instantly, he found his future. He loved the class and thrived. Because he now had a direction, his other grades improved.

My son Josh was lucky. Fallbrook High School in California, was one of the few that offered any type of vocational classes. Through this training, Josh was able to not just learn welding, but CAD engineering, CNC machining, and vehicle fabrication.

The program was so successful that the metal shop teacher had companies approaching him to recruit students. From large companies such as shipbuilders General Dynamics in San Diego down to local machine shops.

These students are getting great paying jobs immediately upon graduation.

For a young person that gets in the trades, a training or apprenticeship program can be as little as two years, require less debt and get you a great paying job.

This scenario is ideal, but rare. Josh is now enrolled at a local junior college working on a 2 year degree in welding and fabrication. Had it not been for that shop class, I don’t know where he would be.

The Cost of College

As we push our kids to go to college, we inadvertently make them incur tens of thousand of dollars in debt. Because students are generally guaranteed by the U.S. Department of Education, loans are easy to get.

Universities, in turn, see this influx of money as an opportunity to hike up tuition each year.

The average cost of college is just over $10,000 per year for a public in-state university. Out of state public schools will costs approximately $22,000 a year. For a private university, expect to $36,800. That’s just the average. A year of tuition at Yale can set you back $54,000.

Multiply these amounts by four and you can see the costs add up fast.

For example, 69% of college students from the class of 2018 took out student loans. They graduated with an average debt of $29,800. This is a big burden on a young adult just starting out in the competitive job market.

In comparison, the average cost of a trade school is $33,000 for the entire program. In the case of my son, his junior college has a program that pays for his first year of tuition. He will achieve an associate degree in two years debt free.

The demand for construction jobs is no longer just a guy swinging a hammer. Yes, we will still need plumbers, electricians, welders and heavy equipment operators. However, with the rapid growth of integrated construction technologies, many more opportunities are opening up.

Ben Preston is the Co-Founder of Gearflow.com, an online marketplace built to support the equipment rental industry and the many businesses that operate within it.

Legally Speaking: Construction and the Law Read this Blog Post

U.S. Ports Will Launch Many Large Projects in 2019 Read this Blog Post