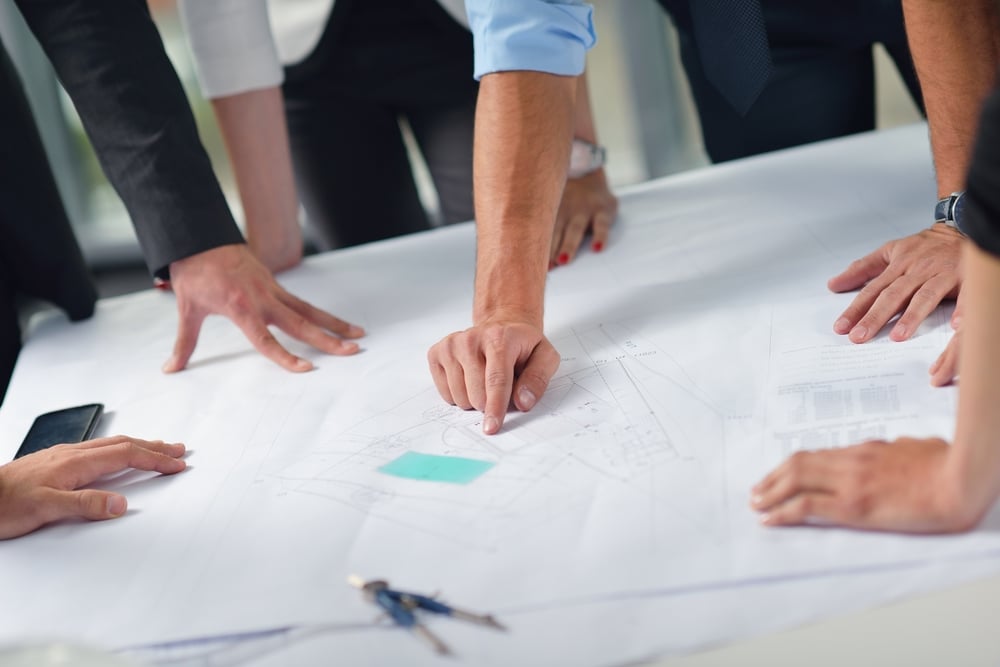 The Ins and Outs of Governmental Construction Bidding

While an exhaustive list of all the regulations and statutes for all the federal, state, and local agencies would be nearly impossible to compile, there are some common requirements and practices that nearly all agencies follow. Here’s a look at a few things to keep in mind when bidding on government construction contracts.

For most public construction projects, cost is the determining factor in awarding a contract. The most common project delivery method is the Design-Bid-Build method where general contractors bid on the project after an architect has already been selected and completed the plans and specs.

Projects must then be advertised, with an Invitation for Bids or Request for Proposals, in a local newspaper or by electronic means, usually on the agency’s website, for a set number of days ahead of the bid date.

While the competitive bidding and the Design-Bid-Build method reign supreme, alternative procurement, contracting, and project delivery methods are being used in public construction and gaining in popularity.

Two project delivery methods seeing an uptick in use are Design-Build and Construction Manager at Risk. With Design-Build, there is a single contract that covers both the design and the construction. While there are design-build firms out there, architects and general contractors will often form a joint venture to submit proposals for these types of projects.

The Construction Manager at Risk (CMAR) method involves hiring a contractor to work as a consultant during the design and construction and is responsible for delivering the project at a predetermined guaranteed maximum price (GMP). This is where the “at risk” comes into play with the CMAR method. If the project exceeds the GMP, the construction manager is financially responsible for any overages.

Rules for using the CMAR methods vary. In North Carolina, it is allowed only after the public entity has determined that CMAR is in the best interest of the project. The CMAR may not self-perform any of the work on the project except in a few rare instances like not receiving any bids for a subcontract.

Other procurement methods used on government contracts include best value, negotiated, sole source, and qualification-based. Some of the contract methods used other than lump sum and GMP include unit price, cost plus fee, and incentive contracts. While these methods aren’t as common, they are used occasionally so it’s a good idea to familiarize yourself with what they entail if you ever come across one as part of your bid/no-bid decision making.

Prequalifying general contractors for in order to bid on specific projects is a growing trend among public agencies, especially on the larger, more expensive projects. Prequalification can be done on a project by project basis or for any projects an agency lets. Again, rules for when an agency can or is required to prequalify contractors varies between public entities.

For example, the Florida Department of Transportation (FDOT) requires that contractors be prequalified in order to bid on any road, bridge, or transportation project that costs more than $250,000. The FDOT prequalification is done on a yearly basis.

Other prerequisites for bidding to a particular agency or on a specific project include registering to bid or receiving security clearances for your workers. To bid on a federal construction project, a company must first register with the System for Award Management. You will need to know your North American Industry Classification System (NAICS) code, tax identification number, and have a registered Data Universal Numbering System (DUNS) code from Dun & Bradstreet.

Be sure to do your homework and perform a little research on any project so you are considering bidding on to take care of any prequalification or prerequisites in plenty of time to be able to submit your bid. It’s no fun when you find a perfect project to bid only to discover that it’ll probably take a month to get prequalified for a project that bids next week.

Often on public construction projects, the owner will hold a pre-bid meeting or site visit to allow contractors and subcontractors to get a better understanding of the project requirements. These are great opportunities to ask questions about the bid or site conditions as well as network with trade contractors or general contractors interested in bidding on the project.

In order to ensure that small, minority-, and women-owned firms had the equal opportunity to participate and compete for construction contracts, many federal, state, and local agencies have established programs to award a certain number of contracts to those businesses.

These programs usually have an overall participation goal for all their projects. For instance, Maryland has the country’s oldest Minority Business Enterprise (MBE) program, dating back to 1978, with a 29% overall participation goal for all construction projects for most state agencies. The U.S. DOT has the Disadvantaged Business Enterprise (DBE) program that covers federal transportation projects and state and local projects that received financial assistance from the U.S. DOT.

The U.S. DOT defines a DBE as:

“A for-profit small business concerns where socially and economically disadvantaged individuals own at least a 51% interest and also control management and daily business operations.

Each agency receiving federal funds for projects are required to set annual DBE participation goals as well as contract-specific DBE subcontracting goals. To fulfill those goals, the DBE subcontractor must provide a commercially useful function. In instances where the participation goal is not met, the prime contractor must prove that they made Good Faith Efforts to meet the goal.

Businesses that fall into any of these categories should get their business certified and registered with the individual agencies in order to take advantage of these programs and projects.

In addition to federally funded or federally assisted projects, 26 states and Washington, D.C. also have their own prevailing wage laws under what are called “Little Davis-Bacon Acts.” Threshold amounts vary from state to state and the prevailing wage will differ based on where the project is taking place so it’s important to note when the apply and what those amounts are so they can be incorporated into your bids.

Government agencies often require construction bonds from prime contractors to guarantee that bids, construction work, and payments to subcontractors and suppliers to ensure that the terms of the bid and contract are followed.

Construction bond typically involves three parties: the obligee, the principal, and the surety. The obligee for public projects is the agency that is bidding out the work. The principal is the general contractor or construction manager. The surety is the agency that underwrites the construction bonds and guarantees payments will be made to the obligee if the general contractor doesn’t meet their obligations.

General contractors purchase bid bonds from the surety which covers the penal sum, or the maximum amount of damages the surety will cover with the bond. The three most common bonds required on construction projects are bid bond, performance bond, and payment bond.

A bid bond guarantees that a bid is accurate and true, and that the contractor intends to perform the work if they win the bid and are awarded a contract. If a contractor submits a bid without a required bid bond, the bid won’t be opened. Obligees can make a claim on the bid bond if the contractor withdraws their bid, doesn’t have the financial credentials to perform the work, or declines an award. In some instance, a claim can be made if a contract isn’t executed within a set number of days after award. Bid bonds are typically for 5% of the total bid.

Payment bonds are in place to ensure that the general contractors pay all their subcontractors and suppliers for the work and materials provided. If a contractor defaults or files for bankruptcy, the owner can make a claim and use the money to pay any outstanding balances. Payment bonds are typically for 100% of the bid.

Performance and payment bonds are required by the Miller Act for federal projects and are governed by “Little Miller Acts” by individual states.

Other types of bonds that are sometimes required on construction project include: contractor license bonds, supply bonds, and maintenance bonds. Contractors should check with their surety agent to review your company’s financials, skills, resources, and capability to perform the work.

Most surety companies give you two bonding capacity amounts: one for single projects and an aggregate for all open projects. Once you complete a project you should inform your surety agent so they can free up your bond line before your next project if necessary.

Want to learn about federal, state, and local public construction opportunities in your area? ConstructConnect has the most up-to-date project details with plans and specs included all on a single platform.

How Technology Can Improve Every Construction Phase, From Bidding to Getting Paid