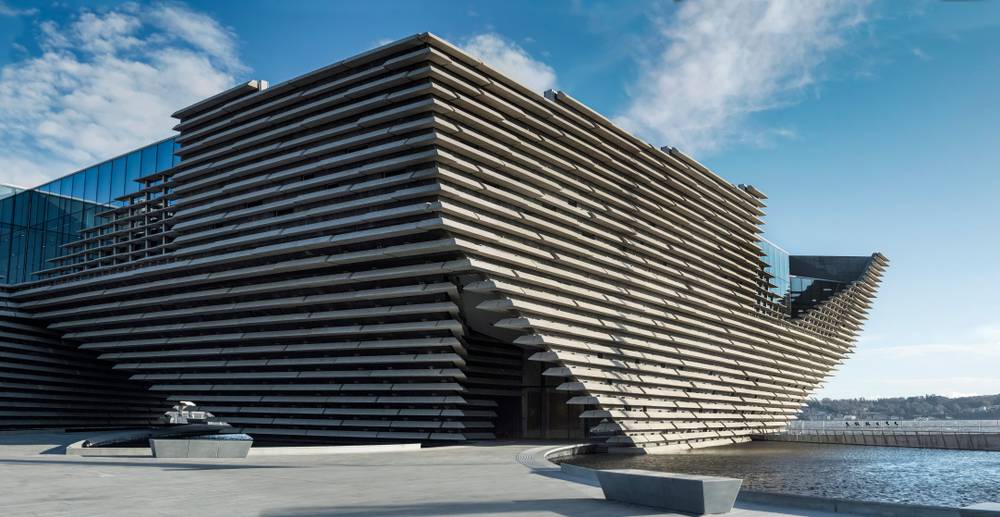 As we roll into a new year and say goodbye to 2018, it’s time to reveal ConstructConnect’s list of “Top 5 Coolest Buildings” of the year. Criteria for inclusion on the list is simple. The building has to have been completed, topped out, or opened within the calendar year and has to have some aspect that makes the building cool. This could be the architecture, sustainability elements, unique construction methods, technology, building materials used, cultural impact, or some combination of these elements.

In no particular order, here is our list for 2018: 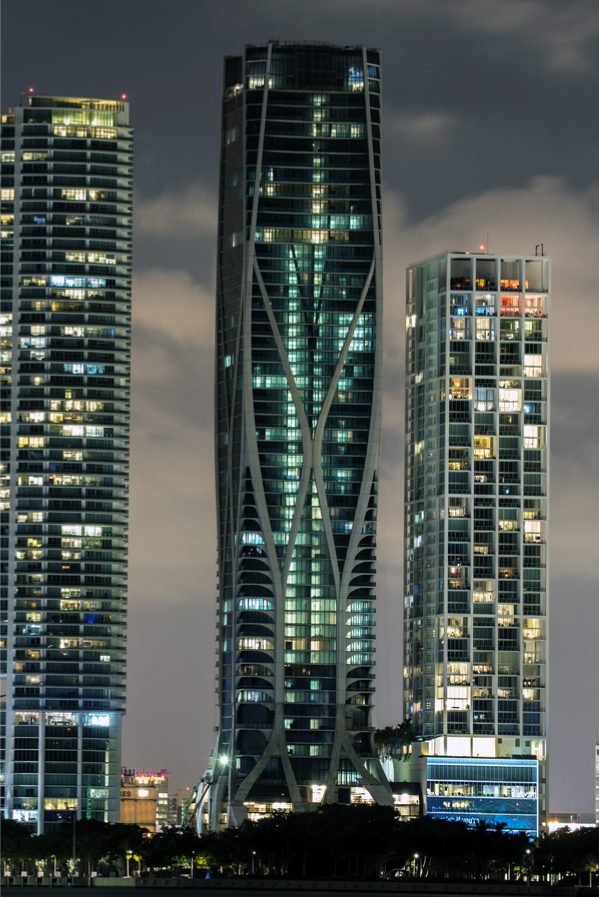 Designed by the late Zaha Hadid and built by Plaza Construction, 1000 Museum luxury residential tower in Miami. The 62-story, 706-foot skyscraper features 83 residential units, a sky lounge, a two-story aquatic center, and the only private helipad on a residential tower on the East Coast. The building was topped out in February 2018.

The unique design of the tower features a curving structural exoskeleton to support the building, which presented a series of design and engineering challenges. The exoskeleton was made using nearly 5,000 glass fiber reinforced concrete (GFRC) panels manufactured in Dubai, packed in specially designed crates, and transported by sea to Miami. The use of GFRC helped cut costs and construction times and the exoskeleton allowed for the thickness of the core wall to be cut in half.

The GFRC panels served as both formwork and permanent façade for the exoskeleton. Once the panels were moved to the site, they were fitted together, set with rebar, and filled with concrete.  This is the first use of GFRC as permanent formwork, the material is typically used as decorative facing as it was on the lower floors of the exoskeleton frame.

1000 Museum, also known as the Scorpion Tower, was featured on the premiere episodes of the PBS documentary series Impossible Builds showcasing complex and challenging construction projects around the world. 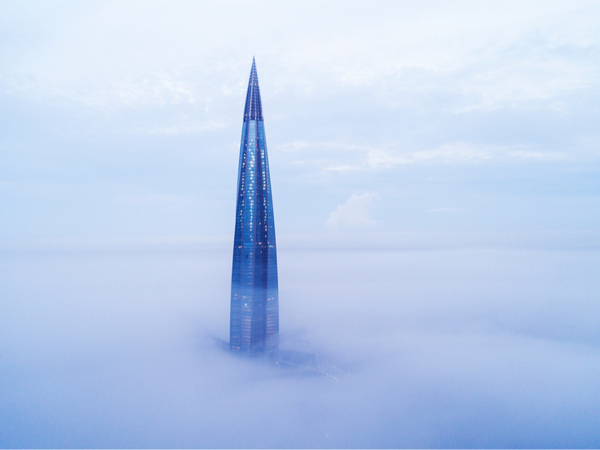 The 87-story, 1,516-foot tall Lakhta Center in St. Petersburg is the tallest building in Europe and 13th tallest in the world. Designed by Tony Kettle and developed by the Russian gas company Gazprom to serve as their new headquarters, the building will also include Europe's tallest panoramic restaurant, office space, and public spaces that will include a spherical planetarium, observation deck, medical center, concert hall, and science and education center. Commisioning of the building was completed in October 2018.

The twisted tower is actually five towers around a central core that twists 90° from the foundation to the spire. The Lakhta Center was precertified as LEED Gold thanks to a number of energy and resource saving measures such as elevators that generate energy when they descend, LED lighting that automatically adjusts based on available natural light, cold accumulators, vacuum waste disposal system, and water and rainwater reclamation and reuse systems.

The building features the world's largest cold bent façade curtain wall and features 16,500 individual glass panels and is outfitted with automatic shutters and valves to regulate the building temperature and improve energy efficiency.

In 2015, the building set a Guinness World Record for the largest continuous concrete pour at 19,624 cubic meters when the bottom slab of the foundation was poured. That record stood until 2017 when it was beaten by a project currently underway in Dubai, UAE. 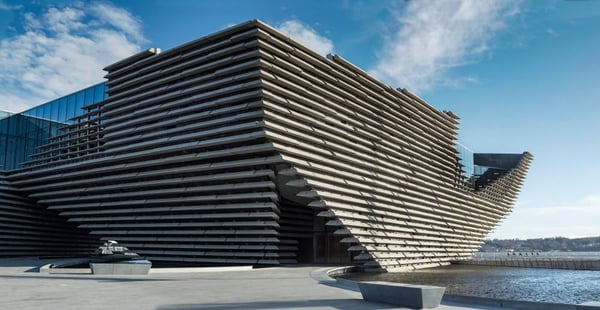 Built on the edge of the River Tay, the V&A Dundee Museum looks like two inverted pyramids connecting at the top. Architect Kengo Kuma was inspired by the cliffs of northeast Scotland when designing the new museum, which is the first design museum in Scotland. Construction was performed by BAM Construction and the museum opened to the public on September 15, 2018

The museum has no straight exterior vertical walls. There are 21 separate wall sections made of curving concrete. They hybrid structural frame is made of reinforced concrete for the core and external and internal walls. and structural steel for the first and second floors as well as the roof.

The exterior façade is made up of 2,466 individual cast stone panels. No two panels are identical and can weigh up to 6,614 pounds measure up to 13 feet long. There were 30 boreholes at a depth of 656 feet drilled to supply the museum with geothermal energy. These, combined with air source heat pumps installed on the roof supply the museum with renewable energy. 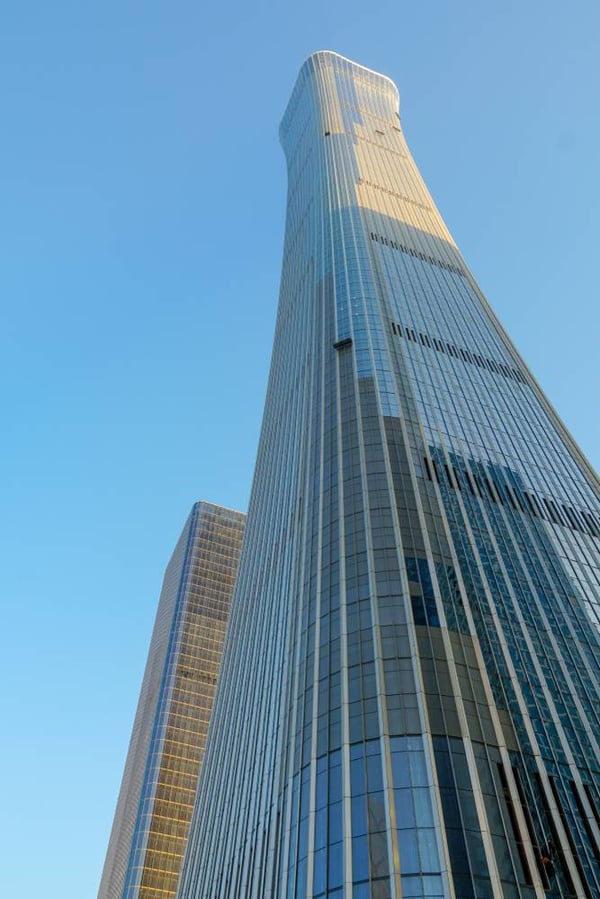 The CITIC Tower, also known as the China Zun Tower due to its resemblance of the zun, an ancient Chinese ceremonial wine vessel, is the tallest building in Beijing and 8th tallest in the world. The building was conceptualized by TFP Farrells and designed by Kohn Pedersen Fox Associates.

The 108-story, 1,731-foot tall skyscraper is a mixed-use building comprised of 60 floors of office space, 20 floors of luxury apartments, and 20 floors of hotel space. The building tapers in from 256-foot-wide base to 177 feet at the 1,263-foot mark and then expands back out to 226 feet at the crown.

The top three floors of the building are not connected to the exterior shell of the building. Instead, they are built inside a trumpet-like structure with rounded floor plates. The building is supported by a square core and truss-like mega frame that was designed using a parametric structural design approach and BIM technology.

To achieve LEED Gold certification, the building incorporates a triple-glazed façade, the use of local building materials, rooftop solar panels, and a greywater toilet system. 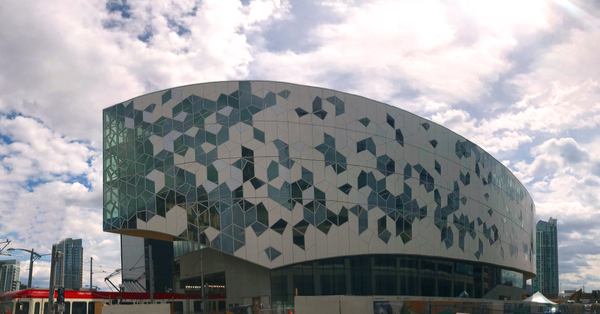 The Calgary Central Library was designed by architect firms Snøhetta and DIALOG and opened to the public on November 1, 2018. The building site sits across a light rail line that had to be encapsulated before vertical construction above could commence. The curve of the rail line helped inspire the design of the building.

The cave-like wooden entrance is made entirely of red cedar planks and designed to resemble the cloud arches formed by Chinooks in the area. The double-curved shell is one of the largest freeform timber shells in the world.

The hexagonal triple-glazed façade is made of fritted glass and iridescent aluminum creating shapes that resemble snowflakes and open books. The library features 450,000 volumes, a performance hall, a 12,000-square-foot children's library, reading rooms and podcast and video recording studios.

Breaking Down the Principles of Lean Construction Read this Blog Post