Mitigating the Risk of Project Cancellations and Delays

Conversely, if a project’s ability to produce income falls or its costs increase, it will experience a decrease in ROI. Within the construction services sector, the average annual ROI pre-pandemic was between 9% and 11%, although this figure has been higher in more recent quarters according to CSI Market. For a planned project that has yet to break ground or be completed, any reason to expect a decline in ROI can greatly increase the risk of the project’s cancellation or delay.

For multiple reasons, the rate of interest on borrowed funds has approximately doubled over the year period ending September 2022. For firms that have been deemed a greater lending risk according to major credit-rating agencies, borrowing costs over the last year have gone from being some of the lowest in history to the highest since the Great Recession well over a decade ago.

According to Bloomberg as cited by a recent Blackrock study, globally 50% of the debt market consists of BBB-rated bonds, this is up substantially from the early 2000s when BBB-rated debt—considered the riskiest of the investment-grade classes—was less than 20% of the total corporate debt market. The latest BBB-rated yield at 5.6% is more than double the 2.3% rate recorded in mid-2021. 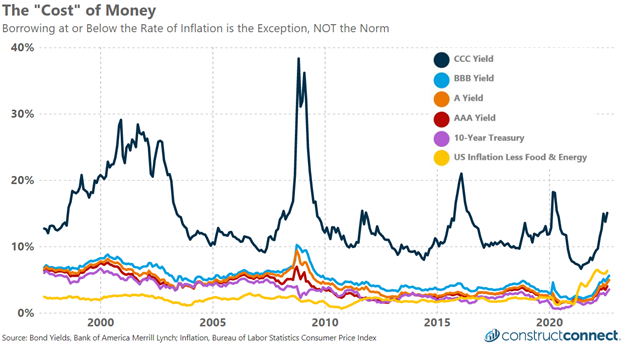 As we move into the final quarter of 2022 and into 2023, the combination of rising interest rates and declining global economic prospects will put significant pressure on ROI expectations. Rising interest rates will increase the annual financing cost of construction projects while simultaneously, a Federal Reserve set on slowing economic growth will likely temper the income-generating potential of such projects.

A decline in ROI of just a few percentage points may reduce returns to the point that projects lose their financial appeal, leading to their cancelation or postponement. Either situation would be very disruptive to the prime contractors, subcontractors, and building product manufacturers whose existence is predicated upon performing the work such projects offer.

To mitigate the risk of project cancellations and delays, contractors may want to carefully evaluate the financial position of an owner/developer. Highly leveraged projects dependent upon borrowed funds will certainly be at greater risk of cancellation and delay than those financed directly by a developer’s internal cash reserves. Knowing that an owner or developer has liens and judgments against them from past projects may serve as a red flag.

Such information can be accessed, usually for a fee, through online credit information providers. Furthermore, construction firms may need to consider tightening their accounts receivables limits and billing terms. Having large dollar amount receivables for both materials and labor in a weakening economic environment can pose a substantial risk to a firm should a customer abandon or delay a project mid-construction.

To reduce this risk, firms should carefully monitor and control the size of their total outstanding accounts receivable by adjusting their receivables policy based on macroeconomic conditions and the specific repayment risk for each customer.

For more insights, check out 5 Things You Must Know About the Economy Right Now.