In recent months, the price spread between European natural gas and U.S. natural gas has grown to unprecedented levels in modern history, largely because of Russia’s tactical closure of major gas pipelines to EU nations. The latest data from the International Monetary Fund and U.S. Energy Information Administration put the price difference measured in dollars per Million British Thermal Units at $42.82. As a result, energy costs in the EU are many times greater than in the United States.

Assuming that these commitments are fully carried through, they will directly boost energy infrastructure building on both sides of the Atlantic. Pipes and pressurization systems that carry unprecedented volumes of natural gas across the United States and Europe will create a significant opportunity for the global industrial construction industry for years to come. 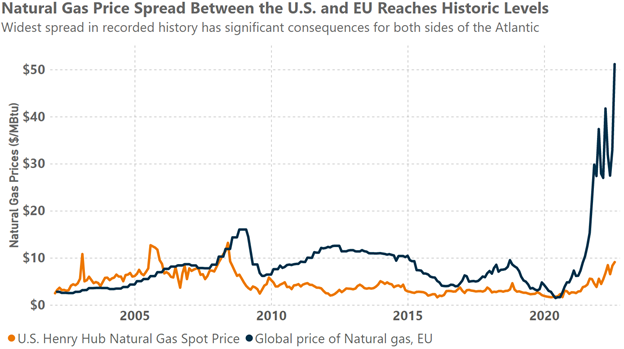 For the rest of the construction industry not directly involved with energy infrastructure, opportunities from Europe’s energy crisis may come in the form of indirect energy exports. Indirect energy exports will include the U.S. production of energy-intensive products which are then exported to Europe where it is either prohibitively expensive to produce such products, or due to a complete absence of energy for industrial uses are impossible to produce.

The net result of such a plan would in allow U.S. manufacturers to share their lower energy costs indirectly through exported products, and not just in the form of raw energy, to Europe. Given the energy intensity of many construction products, such a trade arrangement would help preserve the quality of life of European families and mitigate EU contractors from some of the materials costs increases which will inevitably reduce the size of the construction market until costs normalize.

Volatile shipping costs since the start of the COVID-19 pandemic represent one of the biggest physical and financial challenges to moving energy-as-products to the EU. Based on data available from Drewry as of September 8, the spot rate for shipping 40-foot containers along the ocean route from New York to Rotterdam had been stable in recent weeks at just below $1,300. The same Drewry report concluded that it expects spot prices to “decrease in the next few weeks.” Separately, data provided by the U.S. Bureau of Labor Statistics since May 2022 has shown declining costs for both deep sea freight transportation as well as general freight trucking. Should conditions proceed as expected, shipping costs could continue to fall, enabling more cost savings to reach European consumers.

The U.S. dollar has appreciated by more than 14% against the Euro since the start of Russia’s invasion of Ukraine, representing what is likely the greatest headwind to the successful exporting of U.S. construction products to Europe. America’s rising interest-rate environment, coupled with dimming economic prospects in Europe, has resulted in a U.S. dollar that is stronger now against the Euro than at any time in nearly 20 years.

Should the dollar continue to strengthen, the price of U.S. exports in Europe—priced in Euros— will have to increase to offset the weakening value of the Euro. The net result will be that some of the cost savings from producing goods in the United States, with cheaper U.S. energy, will be lost in the currency exchange.

Trade rules which increase the price of goods imported to the EU represent an artificial cost to sellers and consumers that ultimately makes markets inefficient. Given present circumstances, trade regulators should be amenable to the voice of associations and representatives on both sides of the Atlantic who would rightly argue that reducing or removing trade barriers on energy-intensive goods would improve the well-being of those Europeans who rely on construction products (that is to say, everyone) along with preserving the EU construction market from contracting as a result of extreme product cost increase.

U.S. building product manufacturers have a rare opportunity to support the European construction industry if regulators on both sides of the Atlantic are willing to work together to minimize those regulations which would otherwise stymie the flow of such products to Europe. Europe should recognize its need for U.S. BPMs to maximize the export of energy-intensive goods not only to conserve Europe’s own energy supplies but to protect its construction economy from contraction.

The free movement of global resources will provide Europe with the products its citizens need to mitigate the harm done by those who would weaponize energy to prevent the funding of aggressor nations and protect its economy from unnecessary contraction.