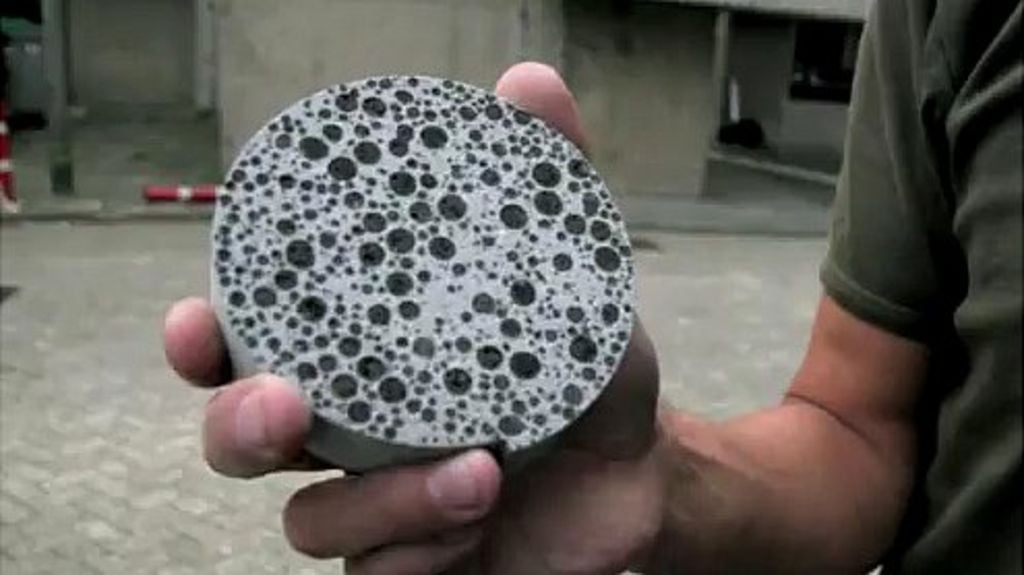 Most people probably don’t give much thought to advancements in building materials. The oldest known bricks date back to around 7500 B.C.  Concrete-like substances were in use as far back as 6500 BC and the ancient Romans mixed lime and a volcanic ash, pozzolan, to make concrete which was used to build structures like the Coliseum and the Pantheon.

Without continued advancements and improvements in building products and processes, we wouldn’t have structures like the Hoover Dam, Golden Gate Bridge or the Burj Khalifa. The discovery of the Bessemer process to inexpensively mass produce steel in the 1850s and the invention of the safety elevator by Elisha Otis in 1852 helped give birth to skyscrapers.

Today we're taking a look at a few examples of the next generation of building materials being researched and developed.

Researchers at the KTH Royal Institute of Technology in Sweden have developed a process to make transparent wood panels. Potential applications of transparent wood include windows, semi-transparent facades and to replace the glass used in solar panels.

The process to make the wood transparent involves taking wood veneer and chemically removing the lignin. Lignin is a complex organic polymer found in plants and helps gives trees rigidity and strength. It also gives wood its brownish color. Once the veneer is stripped of lignin, it is impregnated with a transparent polymer to add strength and improve transparency by allowing light to pass through the wood more directly. The polymer used is polymethyl methacrylate, which you probably know better under one of its trade names such as Lucite or Plexiglas.

Currently, a 1-millimeter thick strip of the new composite is about 85% transparent. The researchers are working to enhance the transparency and scale up the manufacturing process.

Research and development of self-healing concrete and asphalt have gotten a lot of attention over the past several years. It makes sense since concrete is one of the most widely used building materials. Extending the life of the concrete in our buildings, runways, roads and bridges makes it a more sustainable material. The most promising methods for creating self-healing concrete involve embedding the concrete with a substance that will be released once the concrete cracks. Once released, the substance reacts with either the material in the concrete or the carbon dioxide and moisture in the atmosphere to form a substance that will fill the crack and harden.

A team of scientists at the University of Victoria in British Columbia recently announced they are close to having a formula for self-healing concrete. The team has been working to produce self-healing and crack-free concrete. They have been experimenting with different types and amounts of fibers including industrial waste such as fly ash and wood cellulose.

Henk Jonkers of Delft University of Technology in the Netherlands used dormant bacteria spores to create a bioconcrete. When the spores of bacillus bacteria are exposed to water due to crack in the concrete, they become active and begin feeding on calcium lactate, consuming oxygen in the process. When the oxygen is removed the calcium lactate converts to limestone which hardens and seals the cracks.

Another researcher at Delft has been working for the past several years to create a self-healing asphalt. His method involves adding small steel wool fibers to the porous asphalt concrete mix to make the pavement electrically conductive. Induction heating applied to the electrically conductive asphalt will heal the cracks.

Other methods being tested include using glass capillaries filled with a healing agent and micro-encapsulated sodium silicate as well as coatings that contain polymer microcapsules filled with a solution that turns into a water-resistant solid when exposed to sunlight.

Scientists from Yunnan Normal University and Ocean University of China have designed an all-weather solar cell that works rain or shine. The new solar cell combines a dye-sensitized cell that harnesses organic dye to absorb sunlight with an atom-thin layer of highly conductive graphene.

When raindrops hit the solar panel they will cling to the graphene which is loaded with delocalized electrons. As the raindrops flow over the solar panel, the positively-charged ions found in the salt in the rainwater and the graphene's negatively-charged electrons form a double layer to create electric potential. The separation in the double layer of the positive ions and the negative electrons creates a voltage.

Currently, these panels are not a viable option for a number of reasons. First, graphene production is expensive. Second, the researchers were using saltwater as opposed to rainwater, which contains a lot fewer ions. Third, they were only able to generate hundreds of microvolts. A single AA battery creates about 1.5 volts. Also, the energy conversion rate using the water on graphene was about 7%. The best solar panels have conversion rates around 20–22%.

Researchers at UCLA have developed a way to use carbon dioxide emissions from power plant smokestacks to 3D print a building material they are calling CO2NCRETE. The process involves combining lime with the carbon dioxide to create cement-like material. The new material has only been made at lab scale shaped into tiny cones using 3D printers. The next step is to determine how to scale up the manufacture of the material to create a viable building product.

This isn’t the first concrete product to use sequestered carbon dioxide. Companies like Calera and CarbonCure both use a process of capturing carbon dioxide from industrial emitting sources and converting it into a solid mineral which gets blended into the concrete. Other companies like Novacem are making what they call a carbon negative cement by using magnesium silicate as a substitute for limestone that is found in tradition Portland cement. The silicate gets converted to a magnesium oxide and as the cement hardens in a concrete mixture it absorbs and stores atmospheric carbon dioxide.