ConstructConnect announced today that the latest month’s volume of construction starts, excluding residential work, was $38.7 billion (green shaded box, Table 3 below),+6.5% versus September’s figure of $36.3 billion (originally reported as $34.7 billion). From September to October, there is usually a change of -4% in total nonresidential starts due to seasonality. October’s result was supported by $6 billion in mega project startups (i.e., 3 projects of more than $1 billion each), surpassing $2.3 billion of such work (from 2 projects) in September. 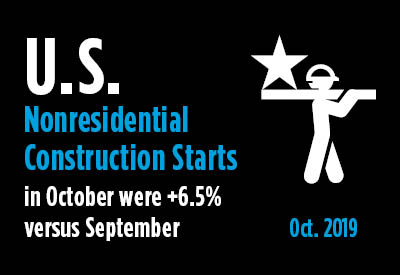 To date in 2019, there have been 29 mega project initiations with a total estimated valuation of $72 billion compared with 16 such projects in the first 10 months of last year, for $40 billion. 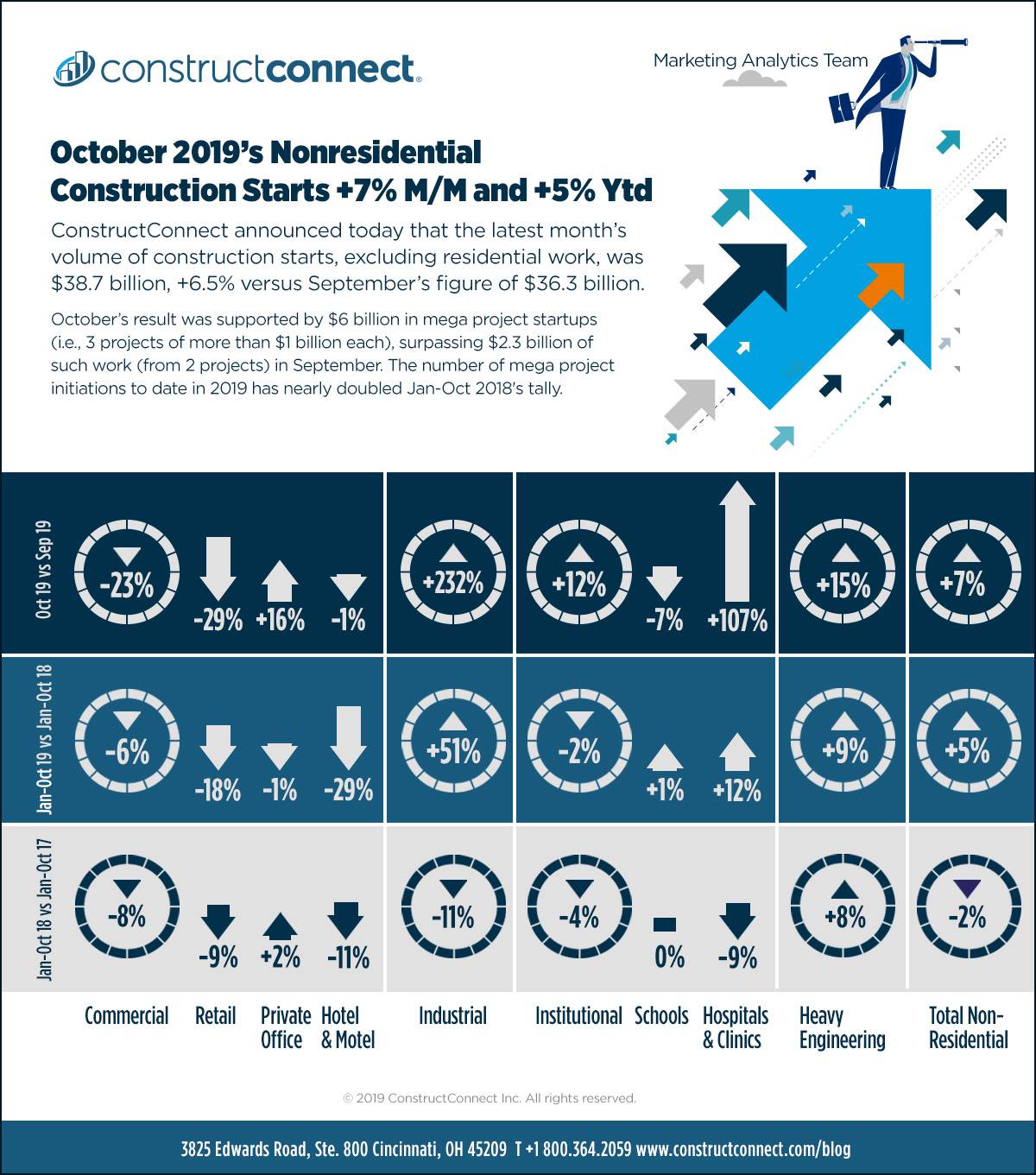 ‘Smoothed’ Series ‒ Grand Total Neither Up Nor Down

The ‘smoothed’ grand total of starts, which includes residential, was flat (+0.2%) in October. Residential activity has been -8.7% on a 12-month moving average basis, with multi-family starts reversing (-12.8%) about twice as quickly as single-family groundbreakings (-6.8%).

‘Nonresidential building’ plus ‘engineering/civil’ work accounts for a larger share of total construction than residential activity. The former’s combined proportion of total put-in-place construction in the Census Bureau’s latest report, for September, was 61%; the latter’s was 39%.

The +6.5% elevation in total nonresidential starts month-over-month (m/m) in October arose in almost every type-of-structure subcategory with only commercial, at -23.4%, holding back. Industrial was +232.1%; heavy engineering/civil, +15.1%; and institutional, +11.8%. October’s starts featured strength in rapid transit and mixed-use industrial work (see Top 10 Project Starts in the U.S. - October 2019).

JOLTS’ Message More Muted and a Flattening in Trend Graphs

From Graph 1, construction job openings, measured as either a ‘rate’ or a ‘level,’ continue to be historically high. Worth noting, though, is that openings for all jobs in the economy, while also high, have been slightly receding over the past 12 months. One might suppose that construction job hires would also be above previous peaks. Such is not the case, however, as is made clear in Graph 2. The ‘level’ continues to slowly rise, but is still well below where it was in the early 00s. The hires ‘rate’ remains anemic, stuck in a range between 5.0% and 5.5%. The all-jobs hires numbers have ceased soaring rapidly, but they are still even with or above prior summits.

Most of the 12-month-moving-average trend lines (Nonresidential Construction Starts Trend Graphs - October 2019), have been displaying either a flattening or a mild tendency to slope downwards of late. That’s certainly been the case for ‘nonresidential buildings’ (Graph 1), ‘institutional’ and ‘commercial’ (Graph 2) ‘private office buildings’ (Graph 3), ‘schools’ and ‘hospitals’ (Graph 4) ‒ with the former showing some recent downdraft and the latter some recent uplift ‒ and ‘water/sewage’ (Graph 5). ‘Retail’ (Graph 3) continues to plummet. ‘Heavy engineering’, though, has some subcategories with curves that are moving smartly higher, especially ‘bridges’ and ‘miscellaneous civil’ (Graph 6).

*Rate is number of hires during month as % of construction employment.
Job Openings and Labor Turnover Survey. Latest seasonally adjusted (SA) data points are for September, 2019.

Tables B-3 and B-8 of the monthly Employment Situation report record average hourly and average weekly wages for industry sectors. B-3 is for all employees (i.e., including bosses) on nonfarm payrolls. B-8 is for ‘production and nonsupervisory personnel’ only (i.e., it excludes bosses). For ‘all jobs’ and construction, there are eight relevant percentage changes to consider.

From October’s BLS Table B-3 (including supervisory personnel), the ‘all-jobs’ earnings increases were +3.0% hourly and +2.7% weekly. Construction workers as a subset of ‘all-jobs’ did less well hourly, +2.4%, but outperformed weekly, +3.7%. From the latest Table B-8 (excluding bosses), the all-jobs compensation leaps were +3.5% hourly and +3.2% weekly. Relatively speaking, construction workers fell behind both hourly, +2.0%, and weekly, +2.8%.

Table 1 conforms to the type-of-structure ordering adopted by many firms and organizations in the industry. Specifically, it breaks nonresidential building into ICI work (i.e., industrial, commercial and institutional), since each has its own set of economic and demographic drivers. Table 2 presents an alternative, perhaps more user-friendly and intuitive type-of-structure ordering that matches how the data appears in ConstructConnect’s online product ‘Insight.’