As we bid adieu to 2022, it’s once again time for our end-of-year annual tradition. No, I’m not talking about plotting revenge against all those people who sent me fruitcake again this holiday season. It’s finally time to reveal ConstructConnect's Top 5 Coolest Buildings of 2022.

Criteria for inclusion on the list are twofold. First, the building must have been completed, topped out, or opened within the calendar year, Second, there has to be some aspect that makes the building cool. This could be the architecture, sustainability elements, unique construction methods, technology, building materials used, cultural impact, or some combination of these elements.

Who doesn’t love a good superlative skyscraper? And while Burj Khalifa isn’t losing its crown as the world’s tallest, 2022 saw the completion of the world’s skinniest skyscraper: 111 West 57th. Also known as the Steinway Tower, the new residential tower overlooking Central Park has a height-to-width ratio of 24:1.

Designed by SHoP Architects and developed by JDS Development Group and Property Markets Group, 111 West 57th sits on the site of the second Steinway Hall in the city, which was designed by Warren and Wetmore and built in 1925 to be closer to the recently opened Carnegie Hall. The historic building, which served as a showroom, concert hall, and offices for the Steinway & Sons piano company, was integrated into the design of the adjoining 1,426-foot tower, renovated, and converted into apartments.

The new tower, clad in terracotta, bronze, and glass, in addition to being the world’s skinniest skyscraper, is also the third tallest building in New York City. For all the Led Zeppelin fans out there, the tower’s pinnacle has a series of setbacks on the south side, earning it the nickname “Stairway to Heaven.”

DJI, the world leader in drone technology, opened its new headquarters, Sky City, this year in Shenzhen, China. Designed by Foster + Partners, Sky City is comprised of two skyscrapers using asymmetrical suspended steel structures. Each tower features six glass volumes cantilevered around their cores at varying heights that are supported by massive steel trusses and suspension tubes. The twin towers are connected by a 295-foot sky bridge that sits 345 feet above the ground on the 24th floor.

The suspended steel structures reduced the need for interior columns allowing for more open and uninterrupted office spaces. The massive V-shaped trusses were used to create four-story tall drone testing labs. A zen garden in each tower lobby welcomes workers as they enter the building, and rooftop gardens on the glass volumes and podium offer a network of green spaces.

The towers were designed to make use of daylighting, and additional sustainability measures include the use of an intelligent control system to reduce energy consumption, rainwater harvesting, and recycling greywater for irrigation. In addition to the flight labs and office spaces, Sky City has auditorium space, research and development areas, and a community health center.

What better way to explore DJI’s new headquarters than with a video filmed using the new DJI Avata drone?

Next on our list is the Rosewood Sao Paulo hotel, designed by architect Jean Nouvel and artistic director Philippe Starck. The new hotel is actually comprised of two buildings. The first is the renovated Condessa Filomena Matarazzo Maternity, which was built in 1943 and saw the birth of half a million babies during its operation. The second building is the Mata Atlantica Tower, a vertical forest whose exterior is covered with interconnected wooden latticework and interspersed with local trees, plants, and flowers throughout as well as on the tower’s rooftops.

The interior of the upscale hotel is adorned with 450 pieces of unique artwork from 57 local artists covering the walls, floors, ceilings, and elevators. The hotel has 160 guestrooms and 100 private residences as well as six restaurants and bars, including two pool and bar areas. Other amenities include a cinema, event space, music studio, and an Asaya well-being center.

Part of the project also included the renovation of the Chapel of Santa Luzia to its original 1922 architecture. Rosewood Sao Paulo is part of the larger Cidade Matazarro development blending the adaptive reuse of existing buildings with new construction.

Sustainability was a big part of the project, with all the construction completed with locally sourced and upcycled materials. There is also a biodiversity program aimed at repopulating indigenous plants and animals from the Mata Atlantica rainforest. Within a year of opening, the hotel is expected to be powered entirely by renewable energy from on-site solar panels and other renewable measures.

The Taipei Performing Arts Center, designed by OMA’s Rem Koolhaus, is a unique take on what a performing arts center can look like, both inside and out. Rather than your typical from and back sides, each of the center’s three theaters jut out from the building’s 10-story glass cube. The exterior of each is clad in aluminum.

There’s the spherical 800-seat Globe Playhouse, the 1,500-seat Grand Theater, and the 800-seat Blue Box. The Grand Theater and Blue Box can be combined to create the 2,300-seat Super Theater. All three theaters share a communal backstage area located in the central hub of the building in part to save space and also to encourage interactions and collaborations between productions.

Another cool feature of the building is the Public Loop which is open to, well, the public. This loop takes visitors from the ground floor all the way up to a viewing platform on the top floor, between the interior and exterior shells of the Globe Theater, and then down an elevator back to the ground floor. Viewing windows throughout the loop allow visitors a glimpse of performances, rehearsals, and the behind-the-scenes action backstage.

The Taipei Performing Arts Center took 10 years to complete due to various delays, with construction starting way back in 2012. The venue finally opened on August 7, 2022, with a performance by the Taipei Symphony Orchestra. 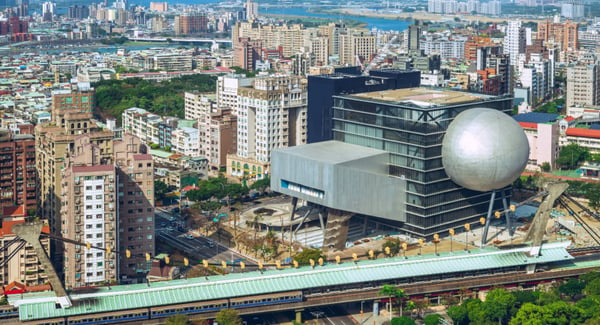 Rounding out this year’s list is the Rose Apartments, designed by Brooks + Scarpa. All buildings serve a purpose, whether it’s commercial, educational, cultural, governmental, etc., but it’s always heartwarming to see buildings purpose-built to address larger societal issues. In the case of the Rose Apartments, they were built to provide permanent supportive and affordable housing to address homelessness. It’s primarily intended for local youths aging out of state or foster care and for the chronically homeless.

The Rose Apartments is in the courtyard housing style developed and popularized in Los Angeles in the 1920s. The ground floor of the building is commercial space and has offices for the Venice Community Housing, which owns the building and is where their administrative offices were located before the site was redeveloped.

Above the commercial space is the 35-unit, U-shaped apartment building surrounding the landscaped courtyard. The LEED Gold-certified building was partially funded by Proposition HHH, which was a ballot measure passed back in 2016 to address homelessness with affordable apartment housing.