Today is National Skyscraper Day, a fact I was just made aware of last week. The 3rd of September wasn’t just picked at random as the day to celebrate skyscrapers. It happens to be the birthday of John H. Sullivan, the architect who coined the phrase “form (ever) follows function” and is considered the “father of skyscrapers.”

In honor of National Skyscraper Day and John H. Sullivan’s birthday today, here are some weird facts about some the world’s most famous, and infamous, skyscrapers.

Many supertall structures have some type of engineering feature, like slosh tanks or tuned mass dampers, to reduce the amplitude of vibration when struck by a strong lateral force, such as those caused by high winds or earthquakes. For Taipei 101 in Taiwan, the mass damper needed to withstand both typhoon winds and earthquakes. The 730-ton spherical mass damper in Taipei 101 is the world’s largest and heaviest wind damper and can reduce swaying of the building by up to 40% by swinging in the opposite direction the building is moving.

Instead of hiding the mass damper away with other building systems, Taipei 101 turned theirs into a tourist attraction. It was also the inspiration for the building’s mascot, Damper Baby. The Damper Baby has a damper body and large round head. Sanrio, the company behind Hello Kitty, was contracted to create the Damper Baby, which has become a popular local icon. The Damper Babies come in five different colors and they have their own line of toys, figurines, collectibles, and comic books.

Burj Khalifa, the world’s tallest skyscraper, is an engineering marvel. At an architectural height of 2,717 feet, Burj Khalifa has held the crown as the world’s tallest building since it was completed back in 2010, taking the top spot from Taipei 101. The Burj also holds several other world records like the highest occupied floor, highest number of stories, highest restaurant in a building from ground level, tallest service elevator in a building, and elevator with the longest travel distance.

The record setting height and long travel distance, along with the curvature of the earth, are what makes this next fact possible. If you time it just right, you can watch the sunset twice in the same day at Burj Khalifa. You start in the lobby watching the sunset the first time, hop on the elevator and take the 60 second trip to the observation deck 1,482 feet above the ground, and watch the sunset a second time. Because the building is perpendicular to the ground, the higher you go, the further away the horizon is allowing you increase your line of sight. Isn’t science fun?

What’s even more impressive about the 1,250-foot tall, 102-story masterpiece is that it took only 410 days to complete construction. So, how was it built so quickly? The answer lies in the ingenuity and efficient systems developed by the general contractors on the project, Starrett Brothers and Eken.

Starrett Brothers and Eken employed an assembly line approach to constructing the Empire State building. Most of the steel and stonework were prepared offsite, the concrete was mixed onsite in the basement, and they used a proto-just-in-time delivery method to make sure workers always had the materials they needed to keep the project moving. 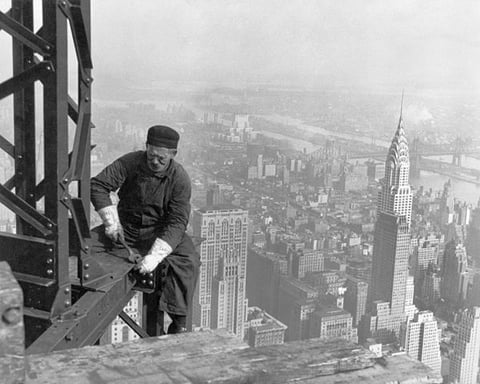 To get the building materials to the various floors, they employed a series of internal hoist, external derricks, and a light-gauge rail system to quickly move materials around the jobsite. They also had lunch counters installed on several floors to provide a good, cheap meal to workers and keep them from wasting time leaving the site to grab a bite to eat and tying up the elevators and lifts when the lunch bell rang.

These systems, combined with detail recordkeeping of man-hours and materials, allowed workers to build four and a half stories per week. It also didn’t hurt that they had upwards of 3,500 workers on the jobsite at a time and that labor and occupational safety regulations weren’t as protective of workers as they are today.

Construction of the Empire State Building began on March 17, 1930 and after 7 million man-hours, the building was structurally completed on April 12, 1931 when one of the developers, Al Smith, ceremoniously shot in the final rivet made of solid gold.

Wichita Falls, Texas is home to an unusual skyscraper. In fact, if you saw it in passing the word skyscraper would never enter your mind. The Newby-McMahon Building is four stories, stands just 40-feet tall, and measures just 11 feet by 19 feet on the exterior.

How did this building come to be known as the “World’s Littlest Skyscraper?” After oil was found in nearby Burkburnett in 1912, the city of Wichita Falls saw its population swell as companies and opportunists, both honest and dishonest, moved in to cash in on the oil boom. One of the latter was J.D. McMahon, an oil man, and apparent snake oil salesman, was leasing office space in the one-story Newby Building near the train station.

Seeing a growing need for more office space in Wichita Falls, McMahon had some blueprints drawn up for an office tower to be built adjacent to the Newby Building, which is didn’t have permission to build on. He shared his plans with investors who ponied up $200,000 (about $3.1 million today) to bring the project to fruition.

McMahon used his own crew from his oil rig construction company to construct the building. When it came time for the building’s ribbon cutting, investors were a little less than impressed with the final product when unveiled in 1919. Instead of a 40-story office tower they thought they were promised, they found a four-story building where the upper floors had to be accessed with a ladder because the elevator never got installed. By this point, McMahon had absconded with his ill-gotten gains.

A local judge ruled that investors had no recourse for recouping their money since McMahon had built the structure exactly as specified. What the investors were too greedy or too trusting to notice was that the scale of the plans was in inches, not feet. Instead of a 480” building, the blueprints called for a 408’ building. News of the story must have spread because in 1920 Robert Ripley featured the Newby-McMahon in his Ripley’s Believe It or Not! cartoon features in The New York Globe in 1920, dubbing it the “World’s Littlest Skyscraper.”

20 Fenchurch Street in London, commonly referred to by its nickname, the “Walkie Talkie” due to its shape isn’t the most well-liked building in the city. It won Building Magazine’s Carbuncle Cup for Britain’s worst new building in 2015. Prior to completion, it had earned a handful of other unfavorable nicknames like “Walkie Scorchie,” “Fryscraper,” and the “Death Ray.” 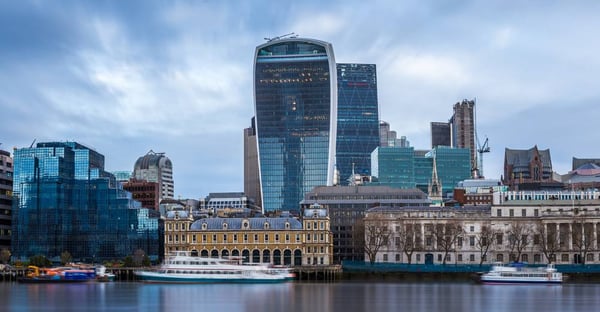 The reason being that during construction the concave glass façade began focusing sunlight into concentrated areas on the street below. The heat from the concentrated beams was so intense that it began melting bicycle seats and parts of a Jaguar XJ. It also shattered slate tiles and burnt the carpet of nearby shops. A journalist even fried an egg using the concentrated sun rays that recorded a temperature of 158°F.

Sunshades were installed to prevent further damage to property and people but that wasn’t the end of the Walkie Talkie’s troubles. After the building was completed, intense gusts of wind caused by the downdraught effect were so strong they tore signs off neighboring buildings and knocked pedestrians over.

If you’ve ever walked past the building at 33 Thomas Street in New York City, you’ve probably noticed it’s missing a key architectural feature typically found on skyscrapers: windows. This wasn’t some goof by the architect or contractor, the 550-foot tall skyscraper was designed that way on purpose.

The building was designed by John Carl Warnecke for AT&T to house switching equipment, cables, and computers for their Long Lines Department, which is why the building is sometimes called the Long Lines Building. AT&T wanted a building that could withstand a nuclear blast so Warnecke’s vision was to build a “20th-century fortress, with spears and arrows replaced by protons and neutrons laying quiet siege to an army of machines within.” Completed in 1974, the building is perfect example of the Brutalist architectural style.

The building has its own gas and water supplies and apparently was outfitted with enough food to feed 1,500 workers for two weeks had a nuclear attack, and its ensuing fallout, ever occurred so that those communication lines wouldn’t be compromised.

According to an investigative report by The Intercept and based on documents obtained from Edward Snowden, the National Security Agency whistleblower, the building has had a more nefarious use than just a telephone exchange. According to their report, the NSA used the building as a surveillance site with the code name TITANPOINTE.

Looking for more skyscraper facts? Be sure to check out our 9 Fun Skyscraper Facts and 5 Outrageous Skyscraper Concepts.