Five of the World's Greenest Buildings 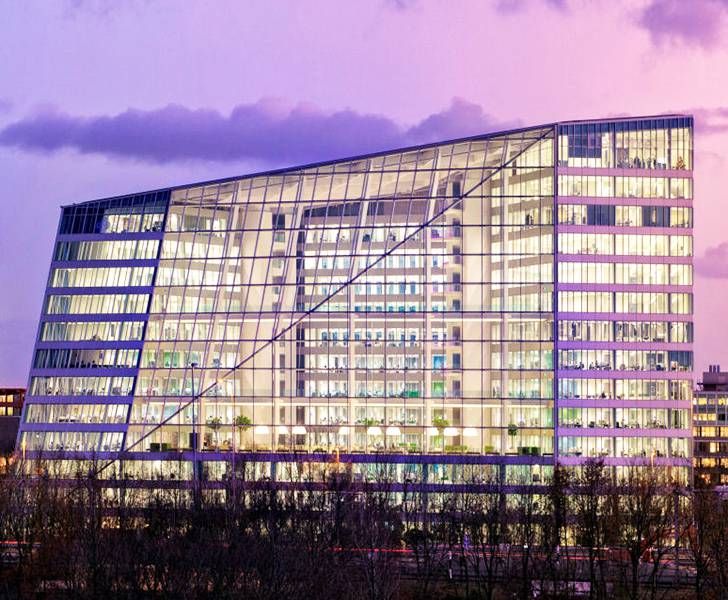 The Edge, Deloitte’s Amsterdam headquarters, earned a Building Research Establishment Environmental Assessment Methodology (BREEAM) of 98.36 percent, which at the time was the highest BREEAM score ever attained. The Edge was beaten out by the Geelen Counterflow headquarters in Haelen, Netherlands which achieved a BREEAM score of 99.94 percent.

The 430,000+ sq ft building, designed by PLP Architecture, uses 70 percent less electricity than a comparable office building. This was achieved by orienteering the building along the path of the sun and using 65,000 sq ft of solar panels on the roof and facades as well as on the roofs of buildings at the nearby University of Amsterdam. The building is net positive, meaning it make more electricity than it consumes, and any extra electricity is given to the university.

Green elements of the building include Ethernet-powered LED lighting, using collected rainwater to for irrigation and to flush toilets and an aquifer thermal energy system to heat and cool the building.  The Ethernet-powered lights are equipped with sensors that monitor movement, occupancy and temperature for better energy management.

The design of the building was inspired by a forest of Douglas fir trees. The 575-panel solar array atop the building is arranged in such a way as to mimic a forest canopy by allowing light to pass through in some areas to the ground below. The solar panels generate about 60 percent more electricity than the building uses each year. Rainwater collected on the roof is stored in a 56,000-gallon cistern located under the building. The collected rainwater is treated to potable drinking standards and supplies the building with all of its water needs. The building features a composting toilet system and all wastewater from sinks, showers and drains gets filtered through the rain garden. The building is constructed mostly of Forest Stewardship Council (FSC) certified wood which was sourced from local, sustainably harvested forests. 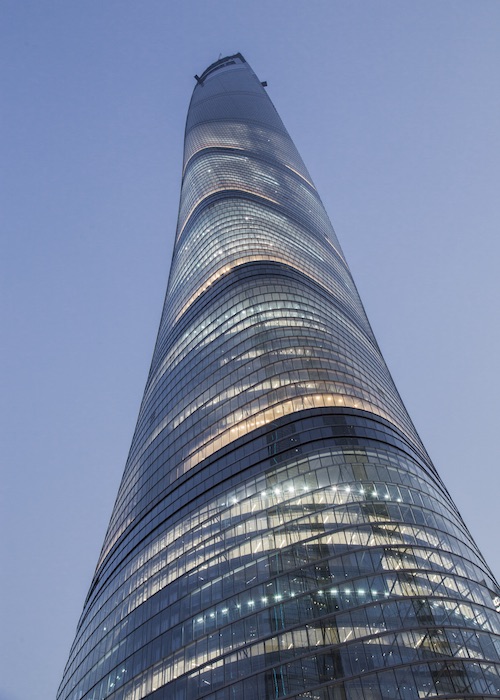 Shanghai Tower, the world’s second tallest building behind Burj Khalifa, has received both LEED Core and Shell Platinum certification and a 3 Star rating from China’s Green Building Evaluation Standard. The building used locally sourced and recycled materials in its construction. The 120° curvature of the building, which was designed to reduce wind loads, is visually stunning and allowed for lighter materials to be used for the structural elements of the building.

The tower features a double-skin facade that provides additional insulation to the building and houses the sky gardens located in each of the nine vertical zones of the building. Other energy saving measures featured in the building are vertical axis wind turbines, geothermal energy, rainwater harvesting and a blackwater treatment facility. These sustainable measures are expected to save about 178 million gallons of water a year and reduce energy consumption by 22%. Pretty impressive for a 2,073-foot tall structure consisting of 4.5 million sq ft. 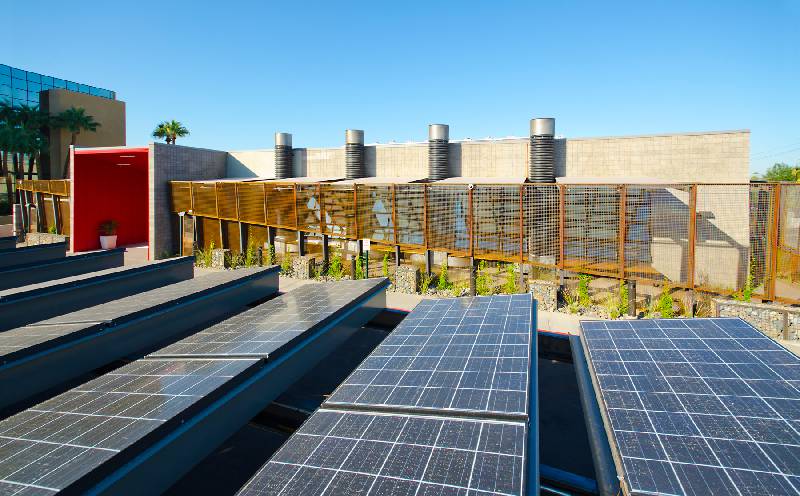 DPR’s regional office in Phoenix is a 16,533 sq ft renovation of a building built in 1972 that previously housed the Castle Boutique Megastore. The project received Net Zero Energy Building certification through the ILFI’s Living Building Challenge as well as LEED-NC Platinum certification. This is in a city where the daily average high temperatures during the summer months are in excess of 100 degrees.

The DPR office utilizes a number innovative sustainability features to help cool the building in the Phoenix heat. There are 87 windows operated by an energy monitoring system to open and close them based on the relative indoor and outdoor temperatures. An 87-foot zinc clad solar chimney creates a convection current that draws cool air into the building and releases hot air out. These two features work with shower towers to regulate building temperatures by acting as an evaporative cooler. The building also features 12 of Big Ass Fans’ eight-foot Isis fans for air distribution and 82 Solatubes that meets practically all of the building’s daytime lighting needs.

The building also features a “vampire” shut-off switch that can be activated by the last person leaving the building and kills power to all power plugs so any electrical device plugged in won’t be wasting electricity. Electricity for the DPR Phoenix building is generated onsite using a 78.96 kW direct current photovoltaic array along with a solar thermal hot water system to generate all the power needed to run the building. DPR’s San Francisco office is also Net Zero Energy Building certified.

Powerhouse is a collaboration of companies including Skanska, the architectural firm Snøhetta, the environmental group ZERO and others that are dedicated to developing energy positive buildings. The Powerhouse Kjørbo involved the renovation of two 28,000 sq ft buildings built in 1980. To be energy positive, the building needs to generate not only the energy required to operate the building but to also cover the energy used to produce the building materials, construction and eventual demolition throughout its 60-year life expectancy. That’s a high bar to set when you consider how much energy is consumed during the production of building materials and construction of buildings.

The building is using geothermal energy and solar panels which were expected to produce twice the energy used by the building each year. The next two projects planned by the Powerhouse consortium, Powerhouse Brattørkaia and Powerhouse Telemark, will be new construction. The idea of energy positive buildings is unique and is probably the next evolution in creating  greener and more sustainable buildings.