The criteria for inclusion on the list is simple. The building has to have been completed, topped out, or opened within the calendar year and has to have some aspect that makes the building cool. This could be the architecture, sustainability elements, unique construction methods, technology, building materials used, cultural impact, or some combination of these elements.

The first project on our list takes us to Lindesnes, located on the southern tip of Norway where we find Under, Europe’s first underwater restaurant and the largest in the world. Designed by Snøhetta, the building resembles the surrounding rock formations on the coast. The structure sits half-submerged on the seabed, 16.5 feet below the surface.

The building features a curved design to withstand the water pressure and wave load caused by the area’s rugged weather and harsh seas. The restaurant features 1.6-foot thick walls and a 36-foot X 13-foot acrylic window that’s a foot thick for diners to view the local marine life while they eat. Special lighting was designed to illuminate the seabed and attract plankton and, in turn, an assortment of marine life including pollack, cod, lobsters, crabs, and spiny dogfish.

The 5,300-square-foot structure was built on a barge and then towed 600 feet before being submerged and anchored in place. The concrete shell is intended to integrate into its surroundings and serve as an artificial reef for limpets and kelp. Cameras and measurement tools have been set up so the restaurant can double as a marine biology research station when not feeding guests. The restaurant opened in March. 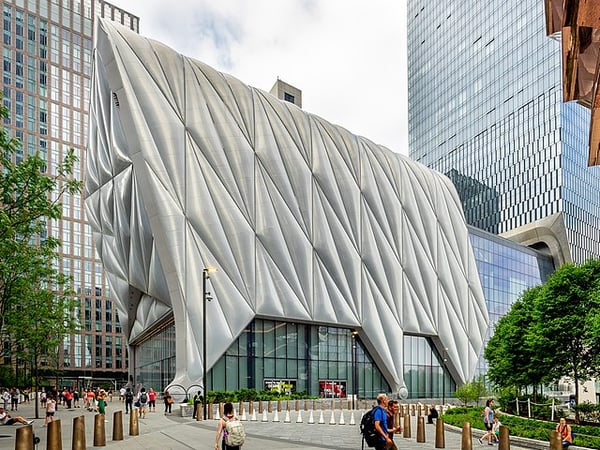 The Shed by Ajay Suresh licensed under CC BY 2.0

We head to the Big Apple for the next project on our list. Located in the Hudson Yards neighborhood, The Shed is a new 200,000-square-foot cultural center designed by Diller Scofidio + Renfro along with the Rockwell Group. The design was inspired by Cedric Price’s never-realized Fun Palace.

The façade of the building is made of luminescent ETFE panels and the telescoping outer shell of the building is set on four single-axle and two double-axle bogie wheels that roll out on tracks to form the McCourt, a 17,200-square-foot performance hall complete with theatrical lighting and sound system. The outer shell, which weighs 4,040 tons, can be deployed in just five minutes and uses about the same horsepower as a Prius to move it into place.

The eight levels inside the building include two large column-free galleries, a 500-seat black box theater, rehearsal space, event space, and more. The flexible space is meant to be adaptable to host a variety of events and exhibitions at once thanks to the five separate acoustic zones. The building cost $475 million and opened on April 5 with the “Soundtrack of America” concert series developed by filmmaker Steve McQueen. 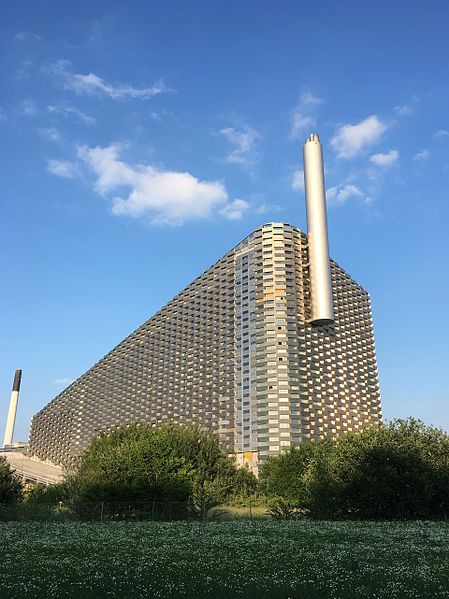 Amager Bakke by Orf3us is licensed under CC BY-SA 4.0

For the third project on the list, we jump back across the Atlantic to Copenhagen where we find the Amager Bakke, a waste-to-energy plant that doubles as a ski slope. Bjarke Ingels and his BIG architect firm in collaboration with a few other design firms won a design competition back in 2011.

Initially planned to open in 2016, the waste-to-energy plant began operations on March 20, 2017, and the ski slope finally opened to the public on October 4, 2019, after a few setbacks and delays. The power and heat plant will burn 440,000 tons of trash a year which is enough to power 60,000 homes and provide heat to 160,000 homes. It is one of the cleanest waste-to-energy plants in the world due to scrubbers that eliminate nearly all of the sulfur oxide and nitrogen oxide.

The roof of the plant serves as the ski slope that rises 279 feet and is 1,476 feet long with a 180-degree turn halfway down the slope. In addition to the artificial ski slope, the building features a rooftop bar and café, ski shop, CrossFit gym, admin offices, an education center, a hiking trail, and a climbing wall that runs the height of the building. The building cost an estimated $670 million to construct. 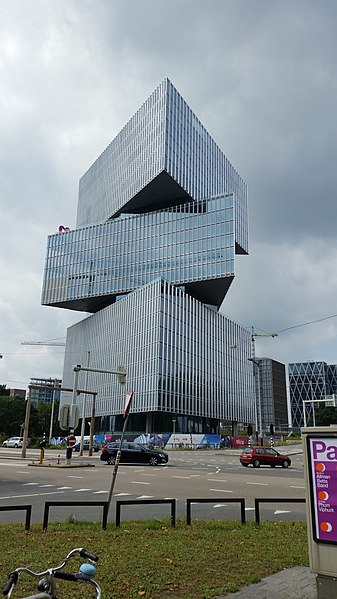 Roughly 400 miles southeast of Amager Bakke, we travel to Amsterdam for the next project on our list. The nhow Amsterdam RAI Hotel was designed by the Office for Metropolitan Architecture (OMA) and construction on the project just wrapped up. The 24-story hotel will have 650 guest rooms spread across 20 floors.

The unusual shape of the building was inspired by an advertisement column on the Europaplein outside the RAI Amsterdam Convention Center and was the tallest structure in the area when it was built in 1961. The three shifted volumetric triangles sit atop a two-story column that will make up the lobby, retail space, and a bar.

The top two floors, which are being called “On Air,” is a mix of lounges, conference and meeting rooms, and a broadcast studio where a daily TV show will be filmed. The hotel is currently being fitted out and is expected to open to guests on January 10, 2020.

5. A Trio of Zaha Hadid Projects

For our final entry on our list this year, we’re going to cheat a bit and give you three buildings instead of just one. I’m a big fan of the work of the late Zaha Hadid and couldn’t just pick one of the buildings she designed that were finally completed or opened this year. Known as the “Queen of the Curve,” Hadid was the first woman to win the Pritzker Architecture Prize back in 2004. She passed away in 2016 at the age of 65.

Designed in collaboration with AECOM, the Al Janoub Stadium, formerly the Al Wakrah Stadium, was the first new stadium commissioned for the 2022 FIFA World Cup hosted by Qatar.

The design of the stadium was inspired by the hulls and sails of dhow boats used by pearl divers and fishermen in the region. The roof resembles the hull of dhow boats turned upside down, with engineered wood beams used to reinforce the imagery, and the façade is reminiscent of sails of the ship.

The stadium was inaugurated on May 16, 2019, as it hosted the final match of the Amir Cup. Because average temperatures in Qatar reach over 100 degrees Fahrenheit during the summer, a solar-powered cooling system was designed to cool the spectator area to 64 degrees and the pitch to 68 degrees. The stadium also has a fully retractable roof made up of 1,400 pieces.

After the World Cup, the 40,000-seat stadium will be reduced to a capacity 20,000 and will be home to the Al-Wakrah Sports Club. The removed seating being donated to developing countries needing sporting infrastructure. The stadium cost around $240-280 million to build, with about half of that going to the stadium's cooling system. 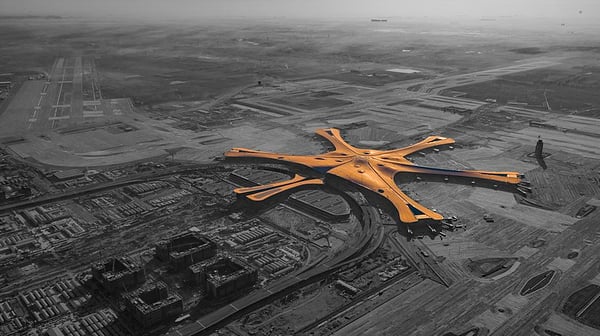 The airport was designed to be one of the most technologically advanced in the world. The airport has 400 self-service kiosks for passengers to check-in and will also implement a 5G network, augmented reality, artificial intelligence, biometric scanners, facial recognition, and other tech to aid travelers, airport staff, and airlines. The airport opened in September.

Not too far from the Daxing International Airport, we come to our final entry on our list of the “Top 5 Coolest Buildings of 2019.” The Leeza SOHO is a mixed-use office building located in Beijing’s Fengtai District which opened in November.

The 45-story building features the world’s tallest atrium. At 637 feet, it overtook the 590-foot atrium located in the Burj Al Arab hotel to claim the title. The open void of the atrium, which twists 45 degrees, runs through the two halves of the building which straddle a subway service tunnel. Skybridges on four separate floors connect the two halves.

Be sure to let us know what new buildings you were excited about in 2019 in the comments below.